Baltimore has its’ own currency called Bnote, and it is now available for purchase and use in more than 60 locations in Baltimore city.

The Bnote comes in $1 and $5 notes, and became available for use on April 18.

According to the Baltimore Green Currency Association, Bnotes are local currency, and:

Local currency, also called complimentary currency, is money that is designed to be used within a community, town, or city.  Whereas national currencies, like the US Dollar, are now loaned into existence, necessitating their repayment with interest to a bank or financial institution, local currencies exist solely to facilitate commerce within a community and to preserve and restore the social nature of trade and business. Dollars are universal, but they don’t have the same power that local currencies have, to promote and grow a local economy, in ways that benefit the people and not banks.

Many merchants in the Hampden neighborhood are accepting the currency, and are ready to get it into circulation around Baltimore.

Here is the list of merchants who are currently accepting the Bnote as currency. They include the very popular Woodberry Kitchen, Golden West, Cafe Hon, 9th Life, Corner Restaurant, Renew Organic Skincare, Sprout Organic Salon, and even two attorneys!

While you’re using your Bnotes in Hampden, make sure to stop by my listing around the corner from the Avenue at 911 38th St. Better yet, you can live there, and just have a quick jaunt to use them! 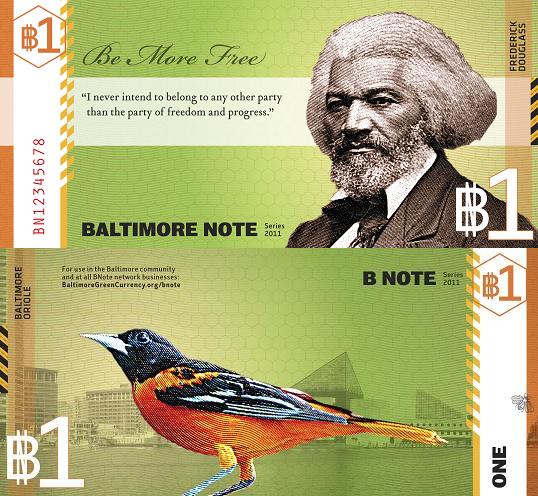